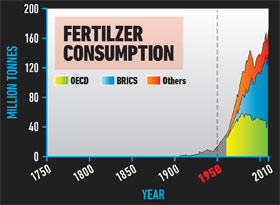 Modern agriculture depends on fertilizers such as phosphorus and nitrogen. It is estimated that the industrial production of nitrogen-based fertilizers sustains perhaps one-third of the total human population. Many people need more fertilizers, especially in Africa, even though Africa is the largest exporter of phosphate rock. Conversely, overuse of fertilizer leads to major environmental problems such as marine dead zones.