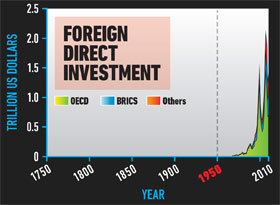 Investment from one country into another is a defining feature of the global economic system and globalization. Foreign direct investment is usually investment by companies rather than governments and involves the transfer of capital, management, skills and technology. Following decades of breakneck growth, the recent global financial crisis is clearly visible as a sharp downturn in foreign investment. But recovery has been rapid.

Graph Caption: Global foreign direct investment in current (accessed 2013) US dollars based on two datasets: IMF (International Monetary Fund) from 1948 to 1969 and UNCTAD (United Nations Conference on Trade and Development) from 1970 to 2010.
Sources: IMF 2013; UNCTAD 2013.