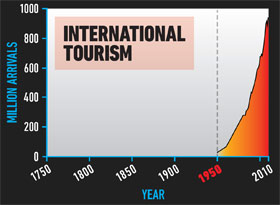 Many in developed nations think nothing of travelling thousands of kilometers for a week’s holiday or even a weekend. In a single generation, commercial airlines have transformed how many travel, and experience our planet. Tourism has risen exponentially and is a key feature of globalization. Lighter materials and better engine technologies are making aircraft more fuel efficient, but this is outweighed by increasing demand for flights.