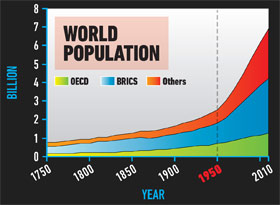 The global population is now about 7.2 billion people. The Industrial Revolution created the tools and technology for a population explosion. But we have now reached "Peak Child". Education and opportunities for women means population will not keep rising exponentially. It will start to level off.