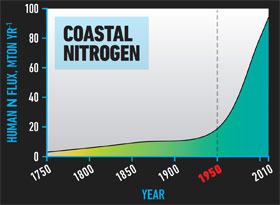 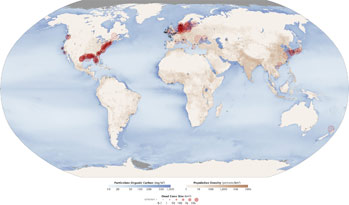 It is estimated that industrial fertilizers are responsible for one third of the global population. However, in many places, farmers use more fertilizer than they need. It runs off the land into waterways and coastal zones causing vast dead zones. Fertilizers are essential to feed the world population, but they need to be managed carefully to avoid unintentional consequences.

Caption: Bohai Sea, China
Credit: Google/Landsat 7, NASA
Map Caption: Aquatic dead zones - Red circles on this map show the location and size of the major marine dead zones—areas where the deep water is so low in dissolved oxygen that sea creatures can’t survive. Such dead zones have grown explosively in the past half-century. Black dots show where dead zones have been observed, but their size is unknown. It’s no coincidence that these dead zones occur where human population density is high (darkest brown). This is because of emissions of nitrogen and other nutrients from agriculture, sewage etc that trigger explosive planktonic algae growth. When the algae die microbes decompose the organic matter, using up the oxygen.
Map Credit: NASA Earth Observatory, http://earthobservatory.nasa.gov/IOTD/view.php?id=44677