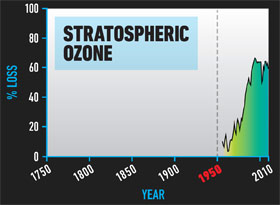 The ozone layer high in the upper atmosphere protects life on Earth from the sun’s ultraviolet radiation. Manmade chemicals called chlorofluorocarbons destroy ozone. In 1985, researchers made one of the most important discoveries in the history of science – a giant hole had appeared in the ozone layer above Antarctica. Nations agreed to ban these harmful chemicals. Recently, the ozone hole stopped expanding and there may even be signs of a recovery.