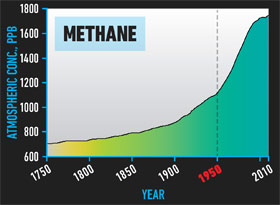 Methane is a greenhouse gas that is about 21 times more potent than carbon dioxide over 100 years. Since the start of the Industrial Revolution, methane in the atmosphere has more than doubled from around 750 parts per billion to about 1850 parts per billion in 2010. In the last decade, the rate of increase has slowed. This may be due to short-term changes in natural sources and sinks brought about by higher temperatures and changing rainfall patterns.