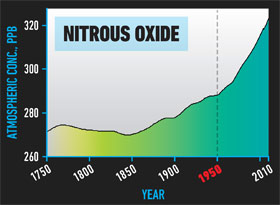 Nitrous oxide is 300 times more potent as a greenhouse gas than carbon dioxide, over one hundred years. Its concentration in the Earth's atmosphere has risen dramatically since the start of Industrial Revolution. The main sources are agriculture and livestock production but burning fossil fuels also produces substantial amounts of the gas.