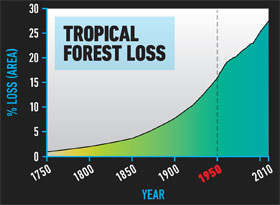 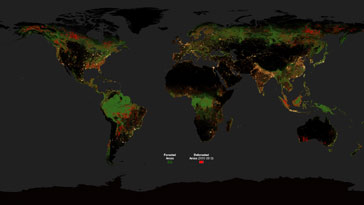 The rainforests are precious ecosystems essential to the functioning of our planet. They harbor a rich diversity of life, they drive weather systems and they absorb carbon dioxide. There is a real risk rainforests like the Amazon may cross tipping points leading to widespread collapse of the rainforest environment and a move to more savannah-like conditions. This is not good for the global climate. Many people and nations understand this threat and want to take action to protect these valuable ecosystems.

Graph Caption: Loss of tropical forests (tropical evergreen forest and tropical deciduous forest, which also includes the area under woody parts of savannas and woodlands) compared with 1700.
Source: Julia Pongratz, Carnegie Institution of Washington, Stanford, US; Pongratz et al. 2008. AD 1700 to 1992 is based on reconstructions of land use and land cover (Pongratz et al. 2008). Beyond 1992 is based on the IMAGE land use model.