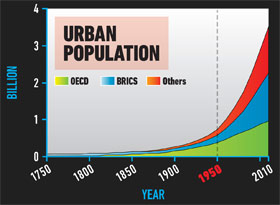 In 2008 humanity passed a historic milestone: over 50% of the global population now live in urban areas. On current trajectories there will be more urban areas built during the first three decades of the 21st century than in all of previous history combined. But cities are the action arms of civilization. They are dynamic hotbeds of innovation. Some cities such as Hamburg and Copenhagen have set targets to become car-free or carbon neutral in the coming decades. Others are following this lead.