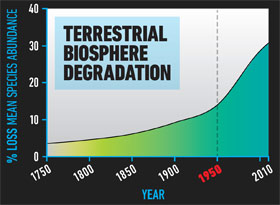 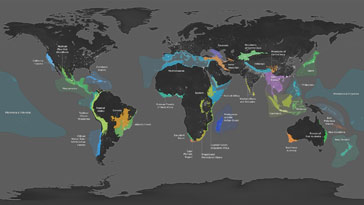 Thousands of species of animal, plant and microorganism are either extinct or dying out. Entire ecosystems are being destroyed. Some scientists say Earth is approaching mass extinction rates. In the past this has often been caused by a massive external event like the asteroid impact that wiped out the dinosaurs. This time, one species is responsible: humans.

Caption: Large-scale deforestation in the Amazon Basin
Source: Google Earth
Map Caption: Biodiversity Hotspots - A Biodiversity Hotspots is a region meeting two strict criteria: it must contain at least 0.5% or 1,500 species of vascular plants as endemics, and it has to have lost at least 70% of its primary vegetation.
Map Credit: Félix Pharand-Deschênes, Globaia.org / Conservation International/Critical Ecosystem Partnership Fund, CEPF.net